A 54-year-old man presents to the hospital emergency department concerned about bleeding from superficial varicose veins of his lower legs (Figure 1). Over the past week, he has developed a pustular rash. There is no itch or pain.

On examination, erythematous, moist, annular plaques are noted on the patient’s legs overlying the varicosities (Figure 2). Peripheral pulses are present. He also has pitting oedema to the knees.

The patient has a long history of recurrent cellulitis and venous stasis eczema and had been treated with long-term doxycycline and topical corticosteroid.

Conditions to consider among the differential diagnoses include the following.

Microscopy and fungal culture are necessary for a diagnosis of tinea corporis because fungal infections frequently mimic many other skin conditions associated with scale, erythema and pustules. The plaque spreads centrifugally, so central sparing creates annular lesions with a raised scaly border. Pustules within the border are not common, so tinea presenting with peripheral pustules is often missed – as had occurred for this patient.1 However, tinea should always be considered in the differential diagnosis of a persistent pustular eruption, particularly when the result of bacterial culture is negative and there is no response to antibiotic therapy.

Minor cutaneous dermatophyte infections are most commonly treated with topical terbinafine cream. Oral therapy is required for infections that are established, widespread or inflammatory, and also for lesions that have not responded to topical therapy.2 The most effective oral option is terbinafine (250 mg daily for two to three weeks), which has a fungicidal action. Other agents have fungistatic action: fluconazole and itraconazole are second-line agents, and griseofulvin is a third-line agent. Longer treatment periods are required for fungistatic agents (particularly for griseofulvin) and treatment needs to be continued until the rash has cleared and fungal scrapings are negative.

Patient education regarding foot hygiene is important to prevent further fungal infection. It is useful to instruct patients to apply topical antifungal treatment such as tolnaftate powder daily or terbinafine cream weekly to the feet and interdigital spaces. Although the rates of reinfection are high, a formal prophylactic regimen has not been developed.

Bacterial swabs and fungal scrapings were taken from the pustular lesions for the case patient described above. A diagnosis of tinea corporis was confirmed by direct microscopy of a skin scraping from the border (prepared with potassium hydroxide) showing fungal hyphae; a culture from the scraping showed the definitive organism was T. rubrum. Swabs returned concurrent S. aureus.

The patient was treated with oral terbinafine 250 mg daily for three weeks. He was also managed with oral cephalexin and topical corticosteroids. The legs were elevated and wet dressings were applied, in addition to firm bandaging. As the inflammation decreased, the friability of his superficial varicose veins subsided. At the end of three weeks, fungal skin scrapings were negative and his skin had returned to normal. He was referred to a vascular surgeon, who confirmed venous insufficiency with ultrasound and placed the patient on a waiting list for bilateral saphenofemoral ligation and stripping of the varicose veins. He was also instructed to apply moisturiser to his legs and terbinafine cream to his feet and interdigital spaces weekly, and to continue this treatment indefinitely. 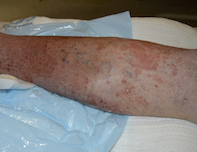 Common skin problems in children. Infectious rashes and infestations
Overview of cutaneous fungal infections
Common and important skin rashes in primary care
A 6-month-old boy with a vesicular rash
Peeling of the palmar surface of the fingers